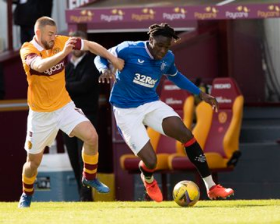 Promising left-back Calvin Bassey impressed Rangers boss Steven Gerrard on his full debut as the Scottish Premiership table-toppers thrashed Motherwell 5-1 at Fir Park on Sunday afternoon.
Before today's contest, the summer signing from Leicester City had made three appearances off the bench for the Light Blues, against St. Mirren and Dundee United in the top-flight, and Willem II in the third round of the Europa League qualifiers.
With first choice left-back Borna Barisic struggling with fitness concerns, Gerrard opted to bring Bassey into the thick of things from the very beginning against Motherwell and the 20-year-old Nigerian put in an assured performance.
Two braces from James Tavernier and Cedric Itten, and a Jordan Jones' strike helped Rangers secure their seventh league win of the 2020-2021 season.
"Calvin [Bassey] is training ever so well and probably deserves an opportunity but whether I would have done it at Motherwell away is another question but Borna has some tightness up high around the hip area so he was a bit of a risk today and I was forced into that one," Gerrard was quoted as saying by Sky Sports post-match.
Meanwhile, Nigeria manager Gernot Rohr was handed a fitness boost ahead of the upcoming friendlies against Algeria and Tunisia, with Leon Balogun playing his first game for Rangers since August 12.
Against Motherwell, the central defender entered the game as a substitute on the hour mark.
Igho Kingsley
Photo Credit : rangers.co.uk
Copyright ANS