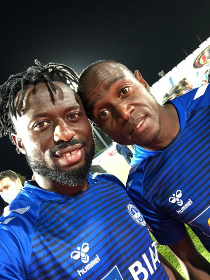 Nigeria international Anthony Okpotu is set to decide his future with US Monastir in the coming days amid concrete interest from clubs in North Africa and Persian Gulf.
The striker put himself in the shop window after scoring 13 goals in 25 appearances to win the Tunisian Ligue 1 top scorer award for 2019-20 and helping US Monastir win their first ever Tunisian Cup on Sunday.
African giants Esperance are interested in the signature of Okpotu but face competition from two Saudi Arabian clubs in Al Etiffeq and Al-Batin FC plus Kuwaiti team Al Kuwait SC.
Speaking after yesterday's Cup final against Esperance, Okpotu told allnigeriasoccer.com : "It was a good game, both teams play good football and they have quality players.
"We didn't have special plans to stop Esperance  but we played according to the tactics of the coach which we've be been doing.
"It is true I finished as the top scorer in the League with 13 goals, I’ll decide where I'll play next season this week but 80% I'm moving."
Okpotu has approximately nine months left on his contract with US Monastir.
Ifeanyi Emmanuel
Copyright ANS