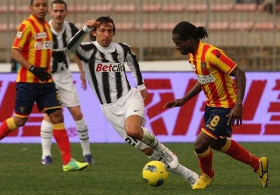 Christian Obodo, Nigeria's record appearance holder in the Italian Serie A with 196 games under his belt for four different clubs Perugia, Udinese, Fiorentina and US Lecce, has insisted that Victor Osimhen made the right choice turning down a move to the English Premier League in favour of joining Napoli.
The former Lille striker attracted concrete interest from Manchester United and Tottenham Hotspur before sealing a big money move to Napoli in the ongoing summer transfer window.
Obodo admitted that Osimhen's move to Napoli is risky but the pressure would be off him once he starts scoring goals.
The Azzurri have a flawless start to the new Serie A season, winning their opening two games and top the table ahead of their trip to champions Juventus, however, their record signing has yet to open his goalscoring account.
When asked if Osimhen made the right choice joining Napoli over Manchester United and Spurs, Obodo told allnigeriasoccer.com : "It is a risk for him, why I say it is a risk is because Napoli when you do something fantastic it will blow all over the country, but if you do silly mistakes, maybe they are expecting more from you and you don't give them the result.

"As a striker, he has played two games now in the Serie A, no goal, but so far so good the team has been winning so there will not be much pressure.

"I pray for him, to stay in Napoli it's not going to be easy for him, but if he starts scoring as soon as possible, he'll be like a king.

"I think he made the right choice because playing in Serie A, it's one of the toughest leagues in the world.

"Everybody cannot play in Premier League, time will come he still has age on his side, if he wants to move further ahead to different clubs like Barcelona, Real Madrid, Manchester United, Tottenham it depends on his performance at Napoli."
Juventus, Napoli's next opponents, have dominated the Serie A in the last decade or so, winning their ninth straight Serie A title last season.
Obodo explained the reason behind the success of the Old Lady and expects other teams to challenge them for the  Scudetto this term.
"They deserve to win because they are spending money to improve the squad. But this year is going to be tough because a lot of teams have also spent money on players.

"Juventus still have majority of their players. For me as a player I don't want them to win the Serie A this time around, I want other teams Roma, Lazio, Napoli to challenge them.
"There should be a different winner, I wish all the teams the best of luck," added Obodo.
Skillful midfielder Obodo, who was a member of the Super Eagles squad to the 2006 Africa Cup of Nations is credited with nine goals and eight assists in the Serie A.
Ifeanyi Emmanuel
Copyright ANS