...the complete Nigerian football portal
Subscribe
Omoijuanfo Who Models His Game After Arsenal Icon Henry Picked As Molde Player To Watch Out For
Published: November 05, 2020 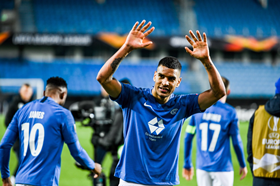 Nigerian striker Ohi Omoijuanfo has been picked as the Molde player Arsenal stars must pay special attention to in tonight's Europa League meeting at the Emirates Stadium in London.
The 26-year-old has proved to be a handful for defenders in the Europa League, scoring in each of his last two games for the Norwegian champions and netted on his debut in the Champions League qualifiers against KuPS in August.
In a previous interview with allnigeriasoccer.com, Omoijuanfo admitted that he modeled his game after Arsenal legend Thierry Henry in his formative years as a footballer.
The former Lillestrom striker has raised his game to another level and is now Molde's main attacking threat with Leke James struggling with fitness issues.
Previewing the matchday three fixture against Molde, Michael Cox wrote for Arsenal's official website : "Ohi Omoijuanfo has led the line so far in the Europa League, scoring the winner in the 2-1 victory over Dundalk and the only goal in the 1-0 win over Rapid Vienna last week.
"Nigerian striker Leke James was the star of Molde's 2019 success, scoring 17 goals , although has been less prolific this season and has been working his way back from injury, and might be used as a Plan B".
Omoijuanfo trailed at Manchester City whilst still a teenager.
Ifeanyi Emmanuel
Photo Credit L moldefk.no
Copyright ANS