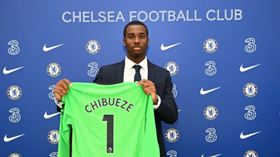 Allnigeriasoccer.com understands that Leicester City Academy are looking to sign Chelsea product Kelechi Chibueze in an attempt to shore up their leaky defence.
The Foxes U18s have conceded an astonishing 36 goals after eight matches in the U18 Premier League, an average of 4.5 goals per game.
While Southampton and Chelsea scored eight goals each against the young Foxes, they let in seven goals against Brighton & Hove.
Leicester City have maintained an interest in Chibueze for roughly one year now but the promising goalkeeper ended up signing a scholarship deal with Chelsea this past summer, only for him to sever his ties with the Stamford Bridge outfit just before the close of the transfer window last month.
A former England U16 international, Chibueze has been training with Leicester City youth teams for about two weeks with a view to signing a contract.
The 16-year-old has earned positive reviews from the coaching staff and teammates and everything indicates that he will be offered a deal.
Chibueze was in goal for Leicester on Saturday afternoon as they suffered a 3-1 defeat at the hands of West Brom in the U18 Premier League.
The King Power Stadium outfit have to move fast to sign the Anglo-Nigerian as he is attracting concrete interest from French Ligue 1 club OGC Nice.
Chibueze spent ten years at Chelsea before ending his association with the London club.
Ifeanyi Emmanuel
Photo Credit : chelseafc.com
Copyright ANS