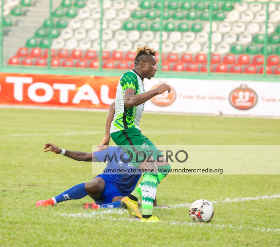 Villarreal coach Unai Emery faced the cameras at Wednesday's virtual press conference ahead of his side's meeting with Maccabi Tel Aviv in the UEFA Europa League and one of the questions he was asked was regarding the future of Samuel Chukwueze.
The Nigeria national teamer has been heavily linked with a transfer to the English Premier League with the likes of Manchester United, Liverpool, Chelsea, Wolverhampton Wanderers, Everton and Leicester City all credited with an interest, and he is also on the radar of La Liga champions Real Madrid.
Quizzed by French-based Nigerian journalist Babatunde Ojora on the future of Chukwueze, Emery said : "We are happy with Samuel Chukwueze, he's growing up here with us and his performances are getting better little by little but above all we want to achieve with him our objectives with his skills, his capacity.

"He is young and he has a very good future and then trying to add his performances for our team, for the national team, maybe in the future he can go to another league to grow up more but I think he's very happy here with us, and every match with him is very important to try to get best performance with him."
Chukwueze has a release clause of 100 million euros which has to be triggered by an interested club before he is allowed to depart the Yellow Submarine before the expiration of his contract.
The 21-year-old would be making his 12th appearance in the Europa League if he features against Maccabi Tel Aviv tomorrow evening.
Ifeanyi Emmanuel
Copyright ANS