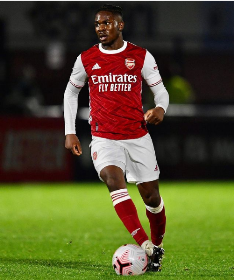 Allnigeriasoccer.com understands that the Nigeria Football Federation are hoping to secure the services of Arsenal central midfielder Tim Akinola ahead of their English counterparts.
The 19-year-old is eligible to represent Nigeria because he was born there as well as England, where he has lived for several years.
Akinola has been compared to Chelsea's world class central midfielder N'Golo Kante due to his playing style.
Nigeria U20 coach Ladan Bosso is already familiar with Akinola and is mulling over inviting him to the Flying Eagles ahead of the 2021 Africa U20 Africa Cup of Nations.
Bosso is understood to be keeping tabs on the promising teenager and has promised to call him up if his performances remain consistent.
Over the last four months, the former Huddersfield starlet has become an integral part of the Arsenal U23 squad and has been called up to first team training by manager Mikel Arteta.
With the exception of the 3-3 draw with Manchester United u23s in October, the Anglo-Nigerian has been involved in all the matches contested by Arsenal U21 and U23 teams this season.
Akinola would not need to file a one-time switch to play for Nigeria because he has no caps for England.
Ifeanyi Emmanuel
Copyright ANS