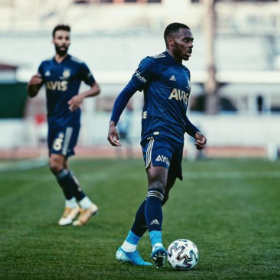 Bright Osayi-Samuel made his full debut for Fenerbahce as they registered a 2-1 win against Hatayspor at Antakya Atatürk Stadı (Hatay) on Tuesday afternoon.
The Nigerian-born winger made his first appearance for the Yellow Canaries off the bench against Rizespor on January 30, two days after completing his move to the Super Lig giants.
Osayi-Samuel was involved in the build-up to Fenerbahce's opening goal, Mame Thiam headed the ball into the net after a good cross from the right wing by the new signing in the 26th minute.
The 23-year-old spoke glowingly about Mesut Ozil shortly after agreeing terms with Fenerbahce but he didn't get to play alongside the former Arsenal playmaker against Hatayspor as he would have hoped.
Ozil entered the game as a substitute in the 77th minute, ten minutes after Osayi-Samuel was replaced.
Nonetheless, the Nigerian was delighted to be named in the starting XI, and posted on Instagram after the game : "Great win today, happy to get my first start for @fenerbahce".
Osayi-Samuel put pen to paper on a four-and-a-half-year contract with Fenerbahce, keeping him at the club until the end of the 2024-2025 season.
Ifeanyi Emmanuel
Copyright ANS