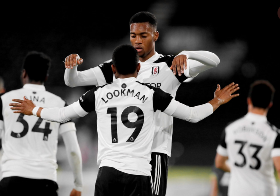 1994 Africa Cup of Nations-winning striker Efan Ekoku was in attendance at Craven Cottage on Saturday night as Ademola Lookman enhanced his growing reputation by scoring the game-winning goal for Fulham in a 1-0 win over Sheffield United.
Ekoku, who usually works as a commentator for Premier League Productions, was on commentary duties for the domestic audience for the game in southwest London.
Manager Scott Parker picked four Nigerian players Tosin Adarabioyo, Ademola Lookman, Ola Aina and Josh Maja in his starting lineup and a fifth Josh Onomah was a non-playing substitute.
Fulham were the better team in the first half but didn't have the real creativity in the final third to test the Blades goalkeeper Aaron Ramsdale.
Two-goal hero against Everton, Maja was very quiet in the first part of the game but it was down to poor service.
The big moment came in the 61st minute when Lookman cut inside and drilled a shot into the back of the net for his fourth goal in Fulham colours.
Aina tried his luck with a dipping drive which was saved by the Sheffield United goalkeeper in the 73rd minute.
Following the win, Fulham are now three points from safety before the London derby against Eberechi Eze's Crystal Palace next Sunday.
Ifeanyi Emmanuel
Photo Credit: fulhamfc.com