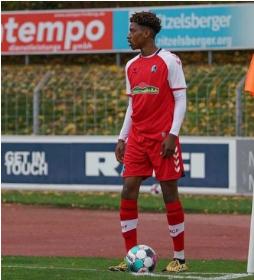 Young Nigerian defender Kimberly Ezekwem has hit a rich vein of form at German club SC Freiburg and will fancy his chances of a first-team breakthrough in the coming months.
A product of the Bayern Munich academy, the left-back departed the Bundesliga champions for SC Frieburg in the summer of 2018 and has continued to climb up the ladder, first playing for the U19s before he was promoted to the reserve team in 2020-2021.
Ezekwem has cited Bayern Munich star David Alaba as his role model, and just like the Austria international he is comfortable being deployed as a central defender.
Indeed, manager Christian Preußer has continued to use him as the left-sided central defender in a 3-4-3 formation this seaosn and he has caught the eye, with an impressive five assists in his last nine matches in the fourth-tier of German football, Regionalliga Südwest.
Ezekwem's versatility means he can also play as a left wing-back and left midfielder.
The 19-year-old was called up to SC Freiburg first team training this week ahead of their Bundesliga clash against Bayer Leverkusen.
He has helped SC Freiburg II to the top of the Regionalliga Südwest standings, starting 18 out of a possible 22 matches in the division.
Ifeanyi Emmanuel
Copyright ANS