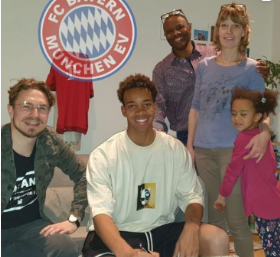 With a statement on their official website, German Bundesliga champions Bayern Munich have confirmed the signing of a promising young player Emilian Metu following  a successful trial.
The 17-year-old will be joining Bayern Munich on a four-year deal, until June 2025, when the summer transfer window opens for business.
According to Goal,  Premier League club Burnley and Middlesbrough showed concrete interest in signing Metu but a deal did not materialize due to the coronavirus situation and Brexit, while he passed up the opportunity to join Italian Serie A club Udinese after impressing whilst on trial.
A left-footed central midfielder, Metu is currently on the books of Austrian Bundesliga club SKN St. Pölten, for whom he has made two appearances.
Commenting on his transfer to Bayern Munich, Metu said to the club's official website : "For me, a dream is coming true. My entire family has been a Bayern fan for years, and now I'm going to be part of this great club. I want to assert myself in Munich".
Born to an Austrian mother and Nigerian father, Metu will initially represent Bayern Munich's second team.
Ifeanyi Emmanuel
Photo Credit : instagram.com/emilian_08
Copyright ANS