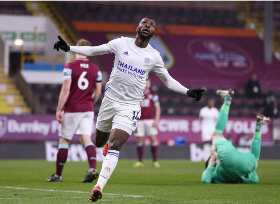 Former Barcelona striker Gary Lineker has hailed Kelechi Iheanacho for his phenomenal goal during Leicester City's Premier League meeting with Burnley on Wednesday evening at Turf Moor.
Brendan Rodgers' team came from behind to earn a share of the spoils as Iheanacho scored with a brilliant over-the-shoulder volley to cancel out Matej Vydra's early opener.
Eleven minutes before half-time, the Nigeria international hit a sweetly-struck volley into the net after Ndidi lofted a ball over the Burnley defence.
It was his first-ever goal after five appearances against Burnley in the English top-flight.
Match of the Day presenter Lineker took to Twitter to react to Iheanacho's brilliant goal, posting : "Beautiful @67Kelechi. Beautiful. 👏🏻👏🏻".
Iheanacho had managed to score only once in the Premier League this season before his sensational goal against the Clarets.
Ifeanyi Emmanuel
Photo Credit : lcfc.com
Copyright ANS