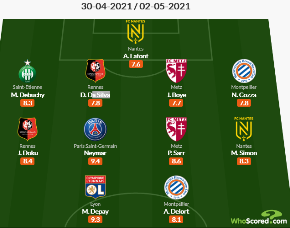 As expected, Moses Simon has been included in the latest French Ligue 1 Team of the Week by celebrated football statistics website Whoscored following the conclusion of matchday 35.
The Nigeria national teamer was outstanding as Nantes registered a comprehensive 4-1 win over Brest,  scoring and providing an assist.
The Ligue 1 Team of the Week contains two players with Premier League experience, namely former Arsenal right-back Mathieu Debuchy, ex-Manchester United striker Memphis Depay, and a third player previously on the books of an English club in former Wigan Athletic center forward Andy Delort.
Alban Lafont (Nantes), Damien Da Silva (Rennes), John Boye (Metz), Nicolas Cozza (Montpellier), Jeremy Doku (Rennes) and Pape Sarr (Metz) complete the players named in the best XI.
Whoscored rated Simon's display as 8.3, 1.1 less than the top performing player in the TOTW, Neymar who scored and assisted in Paris Saint-Germain's 2-1 win against Lens.
Simon's 32 touches of the ball over the course of 69 minutes saw him play 19 passes and have an effort at goal, which of course ended up in the back of the net.
Defensively, the attack-minded player didn't do much, winning two tackles with no interceptions, clearances and blocked shots.
Ifeanyi Emmanuel
Copyright ANS