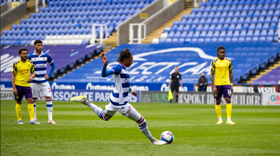 Three Nigeria-eligible players, namely Watford's Isaac Success, Reading's Michael Olise and Wycombe Wanderers' Fred Onyedinma, got on the scoresheet on the final day of the 2020-2021 Championship season.
Super Eagles striker Success ended a goal drought that lasted for 833 days when he wrapped up the scoring for the Hornets in their 2-0 win against Swansea City at Vicarage Road.
Three minutes from time, the former Granada man powered a half-volley into the top corner to double the advantage.
Success's last goal in all competitions prior to today's fixture was against Newcastle United in the fourth round of the Emirates FA cup on January 26, 2019.
Super Eagles target Reading Olise finished the season with a goal involvement of 19 (7 goals, 12 assists) from 44 games in the division.
The former Chelsea schoolboy slammed into the net from 12 yards after the Royals were awarded a penalty in the 18th minute of their 2-2 draw with Huddersfield Town at the Madejski Stadium.
On 26 minutes, Yakou Meite headed home a cross from Olise to make it 2-1 but they were denied a win after a late equaliser.
Wycombe Wanderers bowed out of the Championship in style, thrashing Middlesbrough 3-0 at the Riverside Stadium.
Lagos-born winger Fred Onyedinma got them on their way in the 14th minute when he poked the ball past the goalkeeper after meeting Tafazolli's superb through-ball.
Igho Kingsley
Photo Credit : readingfc.co.uk
Copyright ANS