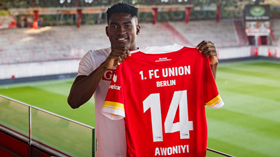 A number of clubs that will feature in next season's Championship are interested in signing 2013 U17 World Cup winner Taiwo Awoniyi, according to reports.
Goal.com claims that Fulham, Stoke City and West Brom are in discussions with Liverpool over a deal for the ex-Golden Eaglets sensation.
Awoniyi is eligible to represent English clubs next season as he has finally been granted a work permit after racking up 32 appearances in the German Bundesliga for Mainz 05 and Union Berlin over the last two seasons.
After this season, it is envisaged that Liverpool manager Jurgen Klopp will run the rule over the Nigerian in pre-season training before deciding whether to retain him in the squad or sanction his departure.
Either way, it has been suggested that Liverpool won't have problems finding a club for the striker as he has also been linked with Anderlecht, Stuttgart, Wolfsburg and Union Berlin.
Given his good performances this season, Liverpool have valued Awoniyi in the region of eight million pounds.
The Imperial Academy product has been on the books of Liverpool since August 2015.
Igho Kingsley
Photo Credit : fc-union-berlin.de
Copyright ANS