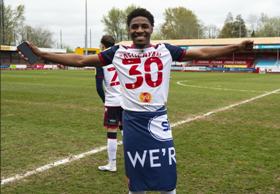 With a statement on their official website, newly-promoted EFL League One outfit Bolton Wanderers have confirmed the permanent signing of Nigeria-eligible striker Dapo Afolayan from West Ham United.
Afolayan has inked a three-year deal that will keep him at The Trotters until the end of the 2023-2024 season.
The 24-year-old joined West Ham in February 2018 and made one senior appearance for the club, against Doncaster Rovers in the fourth round of the Emirates FA Cup in January.
He spent the second half of last season on loan at Bolton Wanderers, scoring one goal and registering two assists in 21 appearances.
Afolayan also enjoyed loan stints at Mansfield Town and Oldham Athletic during his time with the Hammers.
Upon signing a permanent deal with Bolton Wanderers, he said : "I'm delighted to have made the move permanent. Since I joined on loan at the end of January, it has been amazing.
"For me, it's the best thing for me to do – to keep playing regularly for a club that has embraced me.

"It was only right for me to repay that loyalty back to the club, back to the manager and the owners, and the fans as well".
Afolayan's other clubs include Harrow St Marys, Chelsea, Toronto FC, Barnet, Tooting & Mitcham United, ANB Futbol, Loughborough University and Solihull Moors.