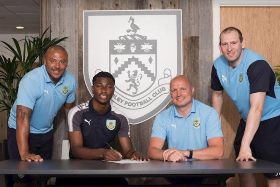 Allnigeriasoccer.com can exclusively report that EFL Championship club Coventry City have entered the mix to sign Nigerian center-back Udoka Chima in the summer transfer window.
The 19-year-old has been unemployed since he was released by Premier League side Burnley at the end of the 2019-2020 campaign.
Newcastle United were the first club in England to make a move for Chima having invited him for pre-season training with a view to offering him a contract but they now face English competition in the form of the Sky Blues.
Chima will start training with Coventry City from Monday, July 5 to Saturday, July 10 and will be offered a deal if he impresses the coaches during the trial.
The defender has been instructed to report at the Alan Higgs Centre, Allard Way Coventry CV3 1HW as from 1000 hours on Monday, and has been told to prepare for 3G and grass surfaces.
Chima will also train at Newcastle United and Primeira Liga side Sporting Braga this summer before making a decision on his next club.
Three years ago, Coventry City attempted to sign him but were unsuccessful prior to his switch to Burnley.
Ifeanyi Emmanuel
Copyright ANS