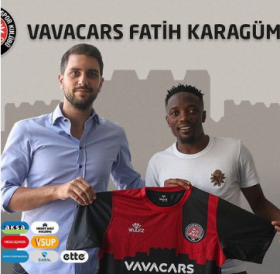 With a statement on their official Instagram account, Turkish Super Lig club Fatih Karagümrük have announced the signing of Super Eagles captain Ahmed Musa following a successful medical.
The financial terms and duration of contract signed by Musa have not been disclosed by the club.
Allnigeriasoccer.com reported on Wednesday that the former CSKA Moscow star was expected to put pen to paper on a two-year contract with an option for an additional season.
"We added the 28-year-old Nigerian attacker to our squad," Fatih Karagumruk said in a statement.

"He played for clubs such as VVV Venlo, CSKA Moscow and Leicester City in his career. He scored 15 goals in 87 matches for the Nigerian National Team.

"We wish success to Ahmed Musa under the Karagümrük jersey, signed by our Vice President Serkan Hurma and our Sporting Director Murat Akın".
The 28-year-old Musa last wore the colours of Kano Pillars in his homeland and counts VVV Venlo, CSKA Moscow and Al-Nassr among his previous clubs.
Ifeanyi Emmanuel
Copyright ANS