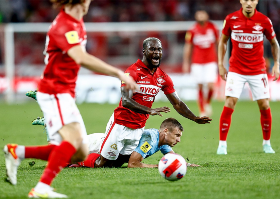 Spartak Moscow manager Rui Vitoria is hoping the injury suffered by Victor Moses during a 2-1 loss to Nizhny Novgorod in a Russian Premier League match on Saturday is not serious.
The 2013 Africa Cup of Nations winner had to give way for Zelimkhan Bakaev in the 36th minute after colliding with an opponent.
Moses had been rated as doubtful for Spartak Moscow's UEFA Champions League third qualifying round first leg tie against Benfica last week but somehow recovered to feature as a substitute.
His participation in the return leg at the Estádio do Sport Lisboa e Benfica on Tuesday, August 10 is completely up in the air following his fresh injury blow.
Asked to give details about Moses's injury, Vitoria said to reporters at the post-match press conference : "So far, I still cannot give you a clear answer to the question, because right after the game they came here, there was no opportunity to talk to our doctors.
"I hope that the injury is not serious, but more detailed information will be provided a little later."
Spartak Moscow have a mountain to climb to progress to the Champions League playoffs after losing 2-0 to Benfica in the first leg of their third qualifying round.
Igho Kingsley
Photo Credit : spartak.com
Copyright ANS