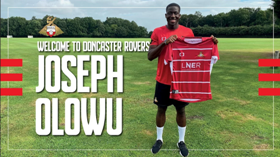 EFL League One club Doncaster Rovers have announced the signing of Nigerian-born center back Joseph Olowu.
Allnigeriasoccer.com exclusively reported this morning that Olowu has put pen to paper on a contract that will keep him at Keepmoat Stadium until at least January 2022, and Doncaster Rovers have confirmed as much.
The former Arsenal youth team skipper has agreed terms with Doncaster Rovers after spending time on trial at Premier League giants Manchester United last month.
Olowu has been signed to add defensive cover with Tom Anderson and Cameron John currently on the sidelines.
In his first words after the deal was confirmed, Olowu told the official website of Rovers : "I’m really excited to get the deal done, it’s been a long summer for me but I’ve kept working in the top this time would come.

"To get this opportunity is something I’m grateful for, patience has been the key and something I’ve learnt in the past few months.

"With everything that’s going on with the pandemic you have to take your time and keep believing that a move will come."