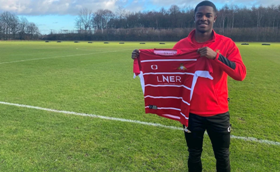 Through their official website, League One club Doncaster Rovers have announced the temporary signing of Irish-born youngster of Nigerian descent Mipo Odubeko.
The West Ham United striker will be spending the remainder of the season on loan at Doncaster Rovers.
Odubeko spent the first half of the season on loan at Huddersfield Town in the Sky Bet Championship, making six appearances off the bench for the Terriers.
Prior to his transfer to West Ham in 2019, he had stops at Manchester City and Manchester United academy teams.
Commenting on his move to Rovers, Odubeko told the club's official website : "I’m excited for what is ahead, between now and the end of the season I’m looking forward to seeing what we can achieve.

"I was on loan at Huddersfield and got recalled by West Ham, then this move came up and I was keen to come and get involved.

"I didn’t get the game time I wanted at Huddersfield but the loan in general helped me massively to develop.

"I learnt so much in such a short space of time which I was happy about, and I can use that now during my time at Doncaster".
Odubeko links up with former Arsenal starlets Joseph Olowu and Fejiri Okenabirhie at Doncaster Rovers.
Igho Kingsley
Photo Credit : doncasterroversfc.co.uk
Copyright ANS