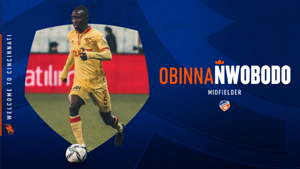 With a statement on their official website , Major League Soccer club FC Cincinnati have acquired former Nigeria U20 international Obinna Nwobodo from Turkish Super Lig outfit Göztepe S.K. via transfer, pending the receipt of his International Transfer Certificate and P-1 visa.
The 25-year-old has signed a three-year contract with FC Cincinnati until the end of the 2024 season with an option for 2025 and will occupy an international roster spot as a Designated Player.
Nwobodo was a key member of the Flying Eagles squad that won the 2015 U20 Africa Cup of Nations, going the distance in the semifinal and final as well as two of the three group stage matches.
The former FC Inter Enugu and Enugu Rangers star departs Goztepe after making 62 appearances in all competitions.
"We’re excited to welcome Obinna to FC Cincinnati, " Chris Albright, FC Cincinnati General Manager said.
"His overall quality will complement our group, while his work-rate and defensive presence in midfield are both exceptional.
"Obi is also a dedicated teammate with a character that fits what we’re trying to build. I’d like to thank our ownership group as they continue to demonstrate their commitment to this club."
Nwobodo ranked first in the Turkish Super Lig in tackles (121), ball recoveries (432), and pressures (772) this season.
Ifeanyi Emmanuel
Photo Credit : fccincinnati.com
Copyright ANS