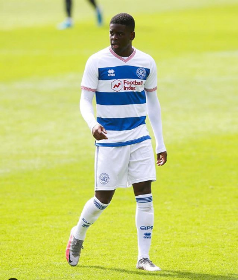 Through their official website, Championship club Queens Park Rangers have announced the nominees for their end of season awards.
Kaduna-born winger Odysseus Alfa has made the shortlist for the Daphne Biggs Young Player of the Year for the 2021-2022 season and to pull top spot has to see off competition from nine other exciting youngsters.
Also nominated for the award are Faysal Bettache, Andre Dozzell, Aaron Drewe, Stephen Duke-McKenna, Joe Gubbins, Charlie Kelman, Murphy Mahoney, Sam McCallum and Dion Sanderson.
Alfa will be hoping to follow in the footsteps of Bright Osayi-Samuel (now at Fenerbahce) who won the Hoops' Young Player of the Year award for the 2018-2019 and 2019-2020 seasons.
The 23-year-old made his senior debut for Queens Park Rangers in a 2-0 win over Oxford United in the second round of the Carabao Cup on August 24, 2021.
Alfa is spending the second half of the season on loan at National League South club Dartford, for whom he made eleven appearances.

Luke Amos and Moses Odubajo have been nominated for the Player of the Year award, having made at least one appearance for the first team this season, but Alfa has been excluded because he's currently on loan.
Igho Kingsley
Copyright ANS