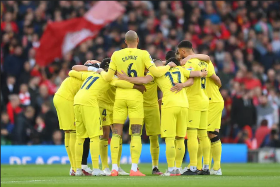 Samuel Chukwueze started in Villarreal's 2-0 defeat against Liverpool at Anfield in the second semifinals game of the UEFA Champions League on Wednesday night.

Chukwueze scored in Yellow Submarines' 1-1 draw against Bayern Munich in the second leg of the quarterfinals to reach the last four of the tournament.

Liverpool and Villarreal have met just twice before in European competition, with both sides winning their home leg of the 2015-16 Europa League semi-finals, when Liverpool would go on to progress to the final against Unai Emery’s Sevilla.

Liverpool had the first real chance as Salah found Mane in the 12th minute with a great cross but the Senegalese could not direct his header on target.

Chukwueze who replaced the injured Yeremy Pino on the right flank felt the full impact of Liverpool's hard press when he was bodychecked by Virgil van Dijk as he made for a counter attacking move midway into the first half with the Dutch centre back booked for the professional foul.


Fabinho had a goal disallowed for offside in the second half but shortly afterwards Liverpool went ahead when Jordan Henderson's intended cross was deflected into the Villarreal net by Pervis Estupinan in the 53rd minute.
The goal was deemed an own goal by the left back and not credited to Henderson.
Sadio Mane doubled the Reds' lead two minutes later and yet another goal was overruled for Liverpool, this time Robert Anderson denied the chance to extend their lead.

Chukwueze was pulled out with 18 minutes to go in place of Senegal’s Boulaye Dia while Dutch forward of Nigerian heritage Arnaut Danjuma was substituted off four minutes to full time for Paco Alcacer.