...the complete Nigerian football portal
Subscribe
Which team would be Sadiq's best choice between Ajax, Benfica and Villarreal?
Published: June 28, 2022 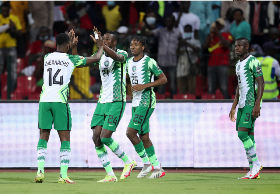 UD Almeria striker Sadiq Umar has been the subject of transfer interest from European clubs like Ajax, Benfica and Villarreal.

The lanky Nigerian striker who notched 18 goals and 12 assists in 36 La-Liga 2 appearances still has three years to run on his contract but his performances have ensured that there is interest in acquiring his services abroad.

However, if a move to the aforementioned clubs is on the cards, allnigeriasoccer.com takes a look at the tactical philosophy of those teams before recommending a move for the Super Eagles star.

Style of play: Umar is superb at holding the ball up and linking up with his teammates, which is why he gets a lot of assists. He is a consistent goalscorer and has good technical abilities in tight spaces.

However, he needs to improve his physical abilities as it makes him a pressing target for opponents who aim to bully him off the ball. For his size, he is also quite weak aerially.

The Eredivisie club has always had one distinguishable identity, "Total football". This term is also known as the Johan Cruyff way and it involves playing domination of the ball on the ground.

It doesn't matter what formation or tactical setup is used, the ideology remains the same.

With Erik ten Hag departing for Manchester United this summer, it is not known what set-up the new manager will settle for, but it is almost 100% certain that the "Total football" idea will be at the forefront.

Nelson Verissimo has been a user of the  4-3-3 attacking set-up. This set-up requires a striker who can run the channels as an outlet, hold up the ball and also quick to make darting runs in behind the last defender.

Unai Emery has always been a flexible coach who tailors his team according to the opposition. However, the basic formation he utilises is the 4-2-3-1 with the striker acting as a secondary creator and finisher.

Allnigeriasoccer.com recommends a move to Ajax due to the footballing identity associated with the club.

Replacing Sébastien Haller who is very much the same stylistic player should be easier for Umar.

However, if a move to Ajax does not materialize, Villarreal would be a good second choice for the Nigerian.