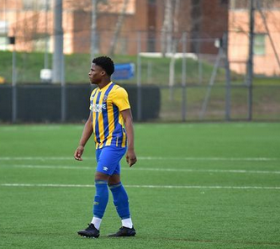 Through their official website, EFL League One club Shrewsbury Town have announced their U18 squad ahead of the 2022-2023 season.

Allnigeriasoccer.com exclusively reported four months ago that Anglo-Nigerian striker Halim Bakre signed a scholarship deal with The Shrews, with effect from July 1, 2022, following a successful trial.

Shrewsbury Town have now confirmed that Bakre is in the first year of his scholarship with the club and is part of their U18 squad for the forthcoming season.

Allnigeriasoccer.com also reported that a plethora of clubs were interested in the services of the promising attacker before he agreed terms with Shrewsbury Town, having undergone trials with Chelsea, Glasgow Rangers, Aston Villa and Middlesbrough.

Halim Bakre is the twin brother of Hazeem Bakre, who is a first year scholar at Huddersfield Town.

He has joined the Shrewsbury Town academy from grassroots club with centers in London, Manchester and Birmingham, Pulse Academy.

Shrewsbury Town U18 side will be competing in the Youth Alliance and FA Youth Cup in 2022-2023.