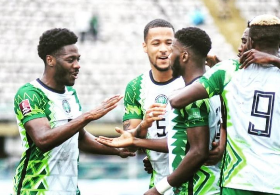 Nigeria manager Jose Peseiro now has at his disposal the full complement of players for an 11v11 training session on Wednesday, with twenty two players including two goalkeepers invited for the friendlies against Algeria now in camp.

It is unclear why Iheaancho showed up for Super Eagles duty two days behind schedule as his teammate at Leicester City Wilfred Ndidi has been in camp since Monday.

Having remained on the bench during Leicester City's opening day draw against Brentford, Iheanacho has been given minutes in each of the last six gamed played by the Foxes in all competitions, scoring once against Brighton & Hove.

Iheanacho will be aiming to earn his first cap under Peseiro when the Super Eagles face off with the 2019 African champions.

The 2013 U17 World Cup Golden Boot winner was not called up for the summer games with Mexico, Ecuador, Sierra Leone and São Tomé and Príncipe - Peseiro's first four games in charge of the national team.

Goalkeeper Francis Uzoho and late invitee Ebube Duru are the two players still being expected in camp as at 0947 hours on Wednesday.