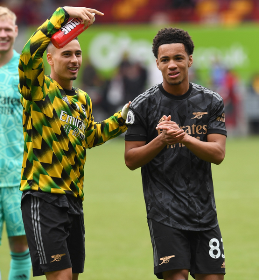 Thirteen days after making his senior debut for Arsenal, England U17 international of Nigerian descent Ethan Nwaneri was back playing for the youth team as the U18s returned to action after the international break.

Nwaneri led the line for Arsenal as they came from behind to register a 2-1 win against Norwich City at Loftus Training Center on Saturday afternoon.

After Charlie Campbell opened the scoring for the Canaries, the Anglo-Nigerian got Arsenal back on terms in the 16th minute and he then turned from scorer to provider when he set up  Oulad M'Hand for what proved to be the game-winning strike in the 24th minute.

Nwaneri has scored and assisted in each of his last two games for the Gunners in the U18 Premier League.

He opened his account in this season's U18 Premier League against Tottenham Hotspur on August 27.

The attacking midfielder was aged 14 years and 44 days when he made his U18 Premier League debut against Reading on May 4, 2021 and played his first game in the Premier League 2 against Blackburn Rovers aged 15 years and 166 days.

With five matches played, Arsenal U18s coached by Jack Wilshere, are fifth in the provisional U18 Premier League table with eight points.