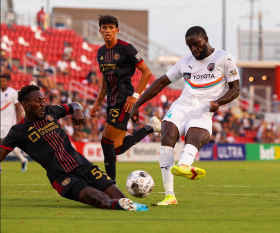 Through their official website, Major League Soccer club Seattle Sounders have announced their end of season roster following the conclusion of the regular season.

Twenty three players are contracted to Seattle Sounders heading into the 2023 season.

A decision on the future of Houston-born Nigerian center forward Samuel Adeniran has been delayed, with The Rave Green stating that his status will be determined  following the conclusion of San Antonio FC’s postseason run.

The 24-year-old is currently on loan at San Antonio FC, for whom he has made twenty appearances and scored ten goals.

Adeniran's deal with Seattle Sounders expires in 2022 but they have club options for 2023 and 2024, which may be exercised at the discretion of the club.

He played for Castellón, Leganés B, Tacoma Defiance, Atlas Delmenhorst, Kickers Emden and Guadalajara before sealing a permanent transfer to Seattle Sounders in December 2021.

Adeniran has made six appearances in all competitions for Seattle Sounders, including four matches in Major League Soccer,and one each in the CONCACAF Champions League and US Open Cup.