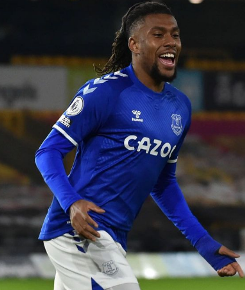 Defoe says Iwobi has improved his game play, becoming one of the indispensable players for Everton this season.

The Nigerian international has enjoyed tremendous growth since the appointment of Lampard as Everton manager in 2022, with him being the heart of the Everton midfield.

"They have a top goalkeeper [Jordan Pickford], Calvert-Lewin coming back and then there is Iwobi," Defoe said to  Premier League Productions via HITC.

"He seems like a different player. He plays in that position, that number ten, where he can play more off-the-cuff. Not focusing too much tactically on the other side of the game, and that has helped him."

The 26-year-old joined the Toffees from Arsenal in the summer of 2019 but failed to hit the ground running in his first two and half years.

He was mostly deployed as a winger by the previous managers, but with the appointment of Lampard he got a midfield role.

The Hale End Academy product has played in the middle of the park throughout this campaign WIT six goal contributions (1 goal, 5 assists) in 14 Premier League games.