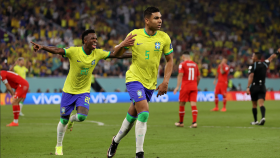 Former Nigeria Football Federation President Amaju Pinnick was in attendance in the 2022 World Cup game game between Brazil and Switzerland at Stadium 974, Doha on Monday evening.

Pinnick, who is a member of the FIFA Executive Council, was seated with Brazilian legends Roberto Carlos and Ronaldo Nazário.

Manchester City defender of Nigerian descent Manuel Akanji was involved for Switzerland as they lost 1-0 to the Seleção Canarinho of Brazil.

Another cap-tied Switzerland international of Nigerian descent, Red Bull Salzburg's Noah Okafor missed out on the matchday squad due to a muscular problem in his thigh.

The exciting winger didn't train with the rest of his teammates in their final training session on Sunday, November 27.

Brazil progressed to the round of sixteen with a game to spare thanks to a match-winning strike from Manchester United midfielder Casemiro in the 83rd minute - the only goal of the contest.

The Swiss national team are seated in second place with three points from two games, three behind table toppers Brazil.