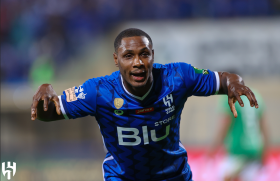 Allnigeriasoccer.com's review of the Nigerian players that found the net for their respective foreign clubs in competitive and friendly matches on Wednesday, December 21, 2022.

At the Stade de La Rabine in Vannes, Nantes were beaten 2-1 by Terem Moffi's Lorient in their last friendly before the restart of the French Ligue 1.

After Lorient opened the scoring in the third minute, 2021 Africa Cup of Nations star Moses Simon equalized for the Canaries with a beautiful curling shot that beat former Arsenal glovesman Vito Mannone, but Aouchiche, with a late goal, secured a win for Lorient.

Fellow Nigeria internationals Terem Moffi and Innocent Bonke were on parade for Lorient., with the latter entering the fray in the 68th minute.

Former Manchester United striker Odion Ighalo is in a rich vein of form, scoring for the third game in a row as Al Hilal thrashed Ettifaq FC 4-0 in a King's Cup match at the Prince Faisal bin Fahd Stadium.

The 2019 Africa Cup of Nations Golden Boot winner opened the floodgates in the 12th minute.

Ighalo has now scored six goals in ten appearances across all competitions in the 2022-2023 campaign.

The Super Falcon finished off the rebound after Aitana Bonmatí's shot had hit the crossbar in the tenth minute and doubled the advantage with a powerful header five minutes later.

As previously reported, Taiwo Awoniyi scored Nottingham Forest's third goal as they hammered Blackburn Rovers 4-1 to advance to the quarterfinals of the Carabao Cup.