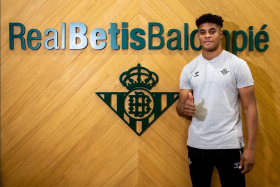 With a statement on their official website, La Liga club Real Betis confirmed on Thursday that the loan signing of Spanish-born Nigerian striker Kevin Carlos Omoruyi has been finalized.

The SD Huesca-owned player will remain at Real Betis for the remainder of the 2022-2023 campaign with a purchase option included in the deal.

Omoruyi has been described as a center forward with good physical and technical attributes and stood out for his goalscoring qualities at SD Huesca, where he was teammates with Kelechi Nwakali before the former Arsenal midfielder moved on to pastures new.

Today a new chapter begins in my football career, happy to be here.

Omoruyi will initially start his Real Betis career with the reserve team, Betis Deportivo Balompié, who are competing in the Primera Federación, the third tier of Spanish football.

The 21-year-old has played sixteen times for SD Huesca's first team, including appearances in the LaLiga 2 and Copa del Rey, scoring two goals.

He was an non-playing substitute in a La Liga match between SD Huesca and Villarreal on the opening day of the 2020-2021 season.

Omoruyi, who idolizes Nigeria legend Daniel Amokachi, has told allnigeriasoccer.com that he is open to playing for the Super Eagles.