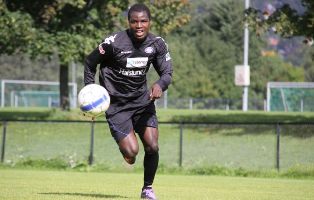 Valerenga midfielder Fegor Ogude has been ruled out of the Super Eagles friendly against Venezuela on November 14, his agent Atta Aneke has specially told allnigeriasoccer.com.

Ogude has been out of action since July 11 when he had to be substituted less than 10 minutes into the game against Odd Grenland after breaking his foot.

Atta Aneke, 34,  has informed this portal that Ogude, ex Warri Wolves skipper, is back to full fitness but officials of his Tippeligaen club have prevented him from making the 4, 700 miles journey to Miami, the venue of Nigeria's friendly against the South Americans.

''Fegor Ogude is now 100 percent injury free and was invited for the friendly against Venezuela . I spoke with the Director of Football of Valerenga and the club don't want to release him for the long trip to the United States as he is just returning from injury,'' says Aneke to allnigeriasoccer.com.

Ogude's last international cap was against Guinea in October 2011. He was signed by Valerenga two years ago as replacement for Nosa Igiebor, who refused to sign for the Oslo based club despite impressing during trials.