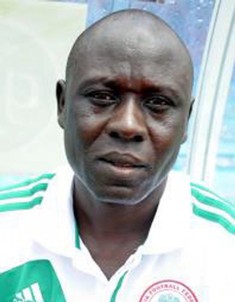 Coach of the Golden Eaglets, Manu Garba is using elimination by substitution method to select the squad that will represent Nigeria at the Fifa Under 17 World Cup billed to be staged in the United Arab Emirates from October 17 - November 8.

Allnigeriasoccer.com understands that there are currently 30 youngsters training in Calabar.

15 of the players in camp featured at the African Under 17 Championship in Morocco while the remaining 15 - mostly made up of defenders and midfielders - were picked from the screening exercise held in Abuja.

In the next three weeks, some players from the pool of 30 will be dropped and another batch of 15 players - largely made up of offensive players - will join the camp.

To put it another way, at anytime in camp there must be 30 players. And even the players that were in Morocco are not safe from receiving the coaches axe.

Nigeria , Ivory Coast , Tunisia and Morocco will represent Africa at the 15th Edition of the Fifa Under 17s.