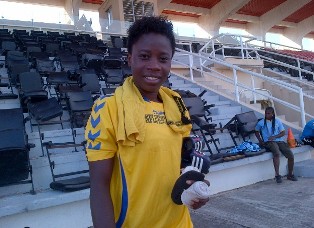 The captain of Nigeria Women Premier League side, Confluence Queens FC of Lokoja Windapo Tobiloba has promised the fans her side’s target this season is to lift a trophy for the club.

According to the Wada Queens skipper, she said “ my target with the club is to help the team lift a major trophy this season, the team is good enough to win either of the F.A or League cup.”

Tobiloba, a citizen of Equitorial Guinea rues the team’s defeat at home to Rivers Angels last season as her regrettable moment of the just concluded season.

“I think we lost out on the League last season when we lost 2-1 at home to eventual winners River Angels, that is my regrettable moment of the Premier League maiden edition ,  ” she said

“We tried everything last season after losing at home to Rivers Angels but I think our best was not enough even though we won away to Pelican Stars, we will improve on our weakness this time to ensure we don’t play second fiddle to any side,” said Tobiloba.