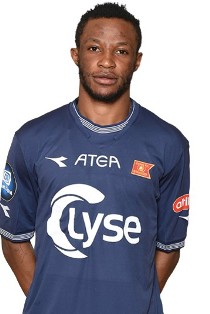 Norwegian Premier League side Viking thrashed  Bryne 4-1 in a pre-season friendly at the Randaberg Arena, thanks to two goals from their Nigerian forward Samuel Adegbenro.

Oddbjoern Skartun gave Bryne the lead after seven minutes but Adegbenro equalized for Viking in the 24th minute, firing the ball past goalkeeper Jonas Høidal.

The Stavanger-based team were ahead at the end of the first-half, courtesy of new signing Aniekpeno Udoh’s 33rd minute strike.

In the second half, Samuel Adegbenro bagged his brace in the 52nd minute before Pedersen slotted home a fourth goal in the last quarter of the game.

Samuel Adegbenro and Aniekpeno Udo both started the game, Suleiman Abdullahi was introduced immediately after the intermission while Usman Sale entered the fray in the 78th minute.