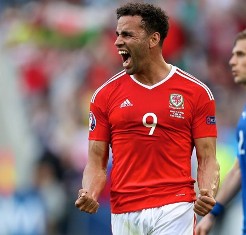 Catch up on the performances of players of Nigerian descent in the 2016 UEFA European Championship on Saturday.

At the Stade Matmut-Atlantique (Bordeaux), former Reading winger Hal Robson-Kanu came off the bench to bag the winner for Wales in their 2-1 win over Slovakia.

The London-born player was introduced in the 71st minute. Real Madrid star Gareth Bale curled in a brilliant free kick in the tenth minute and Duda restored parity for the Slovaks just after the hour mark.

Still in Group B, England surrendered a one-goal lead in the second minute of second half stoppage time, drawing 1-1 with Russia at the Stade Vélodrome (Marseille).

The Three Lions created a lot of chances and finally went in front in the 73rd minute. Tottenham Hotspur midfielder Dier smashed home a free kick on the edge of the Russian box after Dele Alli was fouled.

Alli played the entirety of the contest and would have given England the lead in the third minute but shot wide from 20 meters.

Everton midfielder Ross Barkley will be hoping to get game time in the next two fixtures, against Wales and Slovakia. The number 19 was named amongst the substitutes today.