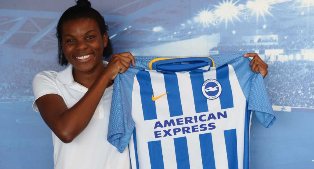 Umotong made it 2-0 when she rounded the keeper before firing the ball into an empty net in the 42nd minute.

The 23-year-old would have broken the deadlock after five minutes but her effort was saved by Laura Sullivan, before she saw her header come off the crossbar moments later.

The Seagulls' other goals were scored by Kate Natkiel (2) and Fliss Gibbons, while Paige Sawyer and Green scored in the closing minutes for the visitors to make the final score 4-2.

Umotong netted on her Brighton debut against Aston Villa on September 24 before increasing her goal tally against Durham.

Born in Calabar, she was part of the Super Falcons squad at the 2015 FIFA Women's World Cup in Canada.