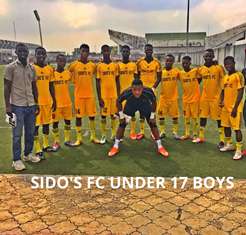 One of Nigeria's representatives in the 2018 CAF Champions League Mountain of Fire FC were beaten 2-0 by Lagos based amateur club Sido's FC in a pre-season friendly held at the Agege Stadium on Friday, December 1.

The supporters of Mountain of Fire found it difficult to understand how a team preparing for the Champions League would lose to an amateur club.

After a goalless first-half, Akin Amoo broke the deadlock 20 minutes into the second half when he beat two Mountain of Fire defenders before firing home from close range.

With the Nigeria Professional Football League outfit in search of an equalizer, Obi Michael Chinedu produced a moment of magic to double Sido's FC's advantage with ten minutes left on the clock.

They have penciled in a series of friendlies against Enyimba, Sunshine Stars Akure, Lobi FC, Kwara United, Ikorodu FC, Gateway FC and Remo FC in the coming weeks.