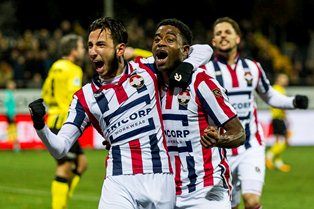 Catch up on the Nigerians who scored for their respective club sides abroad in Wednesday's midweek action.

Aminu Umar notched his third goal of the season after scoring for FK Osmanlispor in their 1-1 draw with Yeni Malatyaspor in the Turkish Cup.

The striker scored in the 19th minute to give his team a lead which lasted for barely seven minutes, the 22-year old was hooked in the 54th minute.

In the Dutch Eredivisie, Bartholomew Ogbeche can't stop scoring for Willem II as he popped up yet again with a 13th minute opener in their 2-2 stalemate against Vitesse, logging the full ninety in the game too.

The goal marked his fifth consecutive effort for Willem II while he now has eight in seven league games this campaign.

If Ogbeche continues scoring at his current rate, more than a goal per game, he would set a new record as the highest-scoring Nigerian in the history of the Dutch Eredivisie by the end of the 2017-2018 season.

The former PSG starlet's goal against Vitesse was his 34th in the Dutch top-flight, which is 16 less than the current record holder Tijani Babangida, who represented Ajax Amsterdam, VVV Venlo and Roda JC.