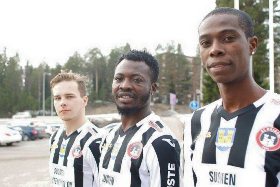 Through a statement on their official website, Finnish Ykkönen outfit AC Kajaani have announced the signing of Nigerian defensive midfielder Ichull Ter'Ade Lordson on undisclosed terms.

Lordson was one of the three players unveiled by the second-tier club this week, the others being Oskari Rounaja and Colombian Cristian Lasso.

He has also worn the jerseys of Nigeria professional Football League sides Nasarawa United and Enyimba.

The 25-year-old was called up to the Nigeria U23 squad ahead of the qualifiers for the 2015 Africa U-23 Cup of Nations.

Lordson could make his competitive debut for his new employer when they take on Oulu in their first game of the new season on April 28.