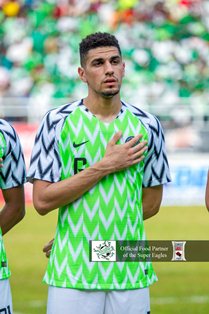 The Super Eagles rounded off their warm up friendlies before the World Cup with a game against Czech Republic in Austria.

The three-time African champions were defeated 1-0 in the contest and Izuchukwu Okosi in this piece looks at the five things learned from the outing...
1. Defensive Mistakes Still Not Sorted
The Super Eagles defence was put under lots of pressure especially in the first half which culminated in the goal scored by Tomas Kalas in the 25th minute.

No Nigerian defender reacted and cleared the ball from the rebound.

Czech Republic forward Patrick Schick saw his shot go wide few minutes after the goal with the defenders letting their goalkeeper down. That could have been the second goal.


2. Uzoho Will Do A Decent Job In Russia

Uzoho made some quite outstanding reflex saves with his hands and feet and the consistent game spell in the warm up matches has surely done him a world of good.

However he needs to improve his ball distribution. The youngster gave away possessions a few times with his throws.

3. European Jinx?
The Super Eagles played a total of six warm up friendlies; four against European opposition, one against South American and one against African rivals, Congo DR.

However, Rohr's team lost their last three friendlies against the Europeans ( 0-2 loss to Serbia; 2-1 defeat against England and the 1-0 loss to Czech Republic).

It may not have a bearing on the outcome of things in the group stages of the World Cup but it does mean that being the team's first two opponents at Russia 2018 ( Croatia on the 16th and Iceland  on the 22nd), the Eagles must up their ante and importantly start well off the block as their first half performances have been shocking.

In the friendly against England on Saturday, the Eagles head coach Gernot Rohr changed his tactics in the second half which confounded his England counterpart Gareth Southgate.

Rohr switched from his more preferred 4-3-3 formation to a 3-5-2 system which saw John Ogu forming a back three with the duo of Leon Balogun and William Troost Ekong and Brian Idowu pushing forward to support the forward players (instructively Iwobi is naturally a midfielder but has been deployed on the flank from the start).

It did not change the result but it means that Nigeria's coach can make changes which could impact on the result albeit it could be predictable.

Lest we forget, the coaches of Croatia, Iceland and Argentina are taking note of this and more during these friendlies.

Once again, the Super Eagles enjoyed massive support from their compatriots who were cheering in the stands.

There were strong Nigerian presence at all the match venues during the friendly matches, and the songs and chants were commendable.

There seems to be a growing belief in this Super Eagles squad despite not having star names like Austin Jay Jay Okocha, Nwankwo Kanu, Victor Ikpeba and Emmanuel Amunike etc.

It was heart warming to see Czech Republic fans wear the Eagles' jerseys and particularly a Czech fan exchanging flags with a Nigerian fan.

The fans started cheering on Tuesday from the beginning of the game with the "all we're saying give us one goal" popular song although that went cold after Czech Republic's goal.