Subscribe
Nigerian Midfielder On The Radar Of Watford As Replacement For Everton Linked Doucoure
Published: December 24, 2018 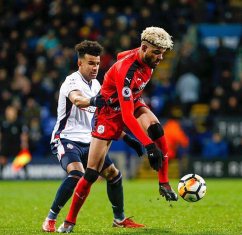 Watford are mulling over a move for Huddersfield Town's Danish-born Nigerian midfielder Philip Billing ahead of the opening of the transfer window.
The Hornets will have to sign a replacement for Abdoulaye Doucoure if the Frenchman departs the Vic in the coming months, with Everton cited as a possible destination.
According to  the Sun, Watford would be willing to pay around £15 million for Billing but but it would be difficult for Terriers boss David Wagner to sanction the sale of the defensive midfielder in January as his team is battling to avoid relegation.
Based on Whoscored's form rankings, Billing is among the top ten most in-form players in the Premier League in the last six games.
Having struggled with injuries for most part of last season, the 22-year-old has announced his arrival in the Premier League this term, scoring two goals in 17 appearances.
Philip Billing has a contract with Huddersfield Town until the end of the 2019-2020 season.
Igho Kingsley
Photo Credit : htafc.co.uk