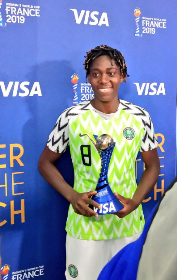 Two Premier League clubs, Chelsea and West Ham, monitored proceedings at the Stade des Alpes, Grenoble as the Super Falcons got their Women's World Cup campaign back on track after registering a 2-0 win against South Korea on Wednesday afternoon.
West Ham midfielder Cho So-hyun and Chelsea Women number 10 Ji So-yun started and went the distance for the Asian side.
Kim Do-yeon scored an unfortunate own goal goal in the 29th minute to give the African champions the lead before Barcelona star Asisat Oshoala doubled the advantage in the 75th minute, a goal which impressed both London clubs.
Reacting to Nigeria's second goal, Chelsea wrote on their official website : ''An unfortunate own-goal and magnificent solo effort by Barcelona’s Asisat Oshoala left South Korea’s hopes of qualifying for the knockout stage in the balance...
''They could not help a singular piece of individual skill, however, from Barcelona forward Oshoala, who streaked away from her marker to latch onto a through ball by 18-year-old Chidinma Okeke and rounded the goalkeeper with class and composure to secure the Super Falcons’ first World Cup victory since 2011''.
In their review of the match, West Ham stated : ''Korea looked to battle back but Nigeria doubled their lead on 75 minutes after a brilliantly worked counter-attack was finished by Asisat Oshoala''.
The 24-year-old Oshoala turned out for Liverpool and Arsenal before transferring to Chinese club Dalian Quanjian in 2017.
Ifeanyi Emmanuel
Photo Credit : fifa.com