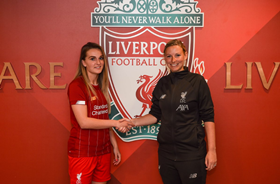 Through their official website, Liverpool have announced that they have completed the signing of Melissa Lawley from Manchester City Women.
The 25-year-old made over 50 appearances for Manchester City in her two-and-a-half-year spell with the club.
She represented The Citizens in the Women's Champions League and helped them win two FA Cups and a Continental Cup.
Commenting on the deal, Lawley stated : ''I’m so excited to get back to playing football and enjoying my football again.
''When I first spoke to Vicky, she turned my head straight away. The plans and the visions she has for this club excite me.

''Watching Liverpool at the end of last season, they finished on a high and I believe this squad has something special that I can add to and hopefully get Liverpool back to where we should be.''
Lawley began her career at Bristol City Academy and spent three years at Birmingham City before joining Manchester City.
The England international will play with the number 11 jersey for Liverpool Women next season.
Igho Kingsley
Photo Credit : liverpoolfc.com