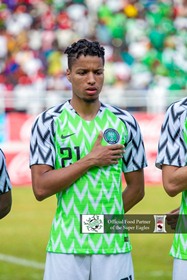 With the 2019-2020 football season gradually getting into full swing, Nigerians abroad have started displaying their talents with their respective clubs and allnigeriasoccer.com will take a look at those who showed quite some spectacular glitz during the activities of last week in its Team Of The Week thus,

Suraj Ayeleso: Ayeleso put in a star turn between the sticks for Kano Pillars in their 4-3 penalty win over Niger Tornadoes the Aiteo Cup final on Sunday.

The CHAN Eagles goaltender saved a spot-kick in shootout to help his team to victory in the N25 million prize money game.

Fikayo Tomori: Tomori has been one of Frank Lampard's trusted men at the rear during the course of Chelsea's preseason activities and started the 4-3 win over Reading last weekend.

The youngster is surely going to play some role for the Stamford Bridge outfit in the new season.

Michael Ihiekwe: His timed run to meet Ben Wiles' free-kick to smash a header against the upright and then reacting quickest to prod home the rebound for 2-1 against Leicester City gets him a spot here.

Even after his error header led to the opening goal, the former Liverpool man was influential in the stalemate.

Semi Ajayi: The Baggies new No. 6 went the distance in his debut game as West Brom were held to a scoreless draw against Bournemouth on Friday, with the defender earning the praise of his manager after a sterling showing.

Tyronne Ebuehi: On for Alex Grimaldo after 73 minutes of Benfica's 1-0 win over AC Milan last weekend, Ebuehi showcased his capabilities and Super Eagles fans will be pleased to see him back in action yet.

The youngster who missed out of the AFCON with the national team will be relishing his chance ahead of his first full season with the club.

Joe Aribo: Aribo has continued to showcase his talent for his new side, Rangers with a string of fine displays including netting a beauty in a 2-0 victory over Progres Niederkorn in an Europa League qualifier last Thursday. Deserves his place here by some stretch.

Sheyi Ojo: The Liverpool loanee has already scored twice in two games for his Scottish club and the latest being a brilliant opener in an Europa league 2-0 win versus Progres Niederkorn.

Quite a start to life with Rangers the 22-year-old's having.

Samuel Kalu: The Super Eagle headed home a consolatory effort for Bordeaux a minute after his introduction in a 3-1 loss to Galatasaray on Sunday.

Perhaps, Paulo Sousa would be tempted to have him star from the off more often?


David Okereke: The new 'Aubameyang' is swiftly settling in his new surroundings in Brugges after netting a debut goal in Club Brugge's 3-1 win versus Waasland-Beveren.

The Dream Team VI striker is surely going to come good with his new side, right?

Victor Adeboyejo: On his debut game for Bristol Rovers on Saturday, the former Chelsea trialist was the hero, netting the solitary goal in a 1-0 win over Plymouth Argyle.

Kelechi Iheanacho: Iheanacho is fast hitting the form which once made him a fan favourite with three goals in his last two games for the Foxes.

A brace against Rotherham United was the latest of his class acts and puts him in good stead ahead of the start of the EPL season.