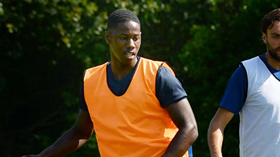 EFL Championship club Sheffield Wednesday have bolstered their defensive ranks with the signing of Nigerian youngster Osaze Urhoghide, informs the official website of the Owls.
Urhoghide has earned a contract with Sheffield Wednesday after impressing their U23 coaches during a trial period.
Nicknamed the Destroyer, he joined the second-tier club as a free agent following his release by AFC Wimbledon at the end of the 2018-2019 campaign.
''We gave Osaze a trial spell with our Development Squad and we’re really pleased with him,'' Academy manager Steven Haslam said.

''He’s a physical defender, he’s hungry, has shown excellent potential and wants to learn – all things we want to see at the club.

''He’s been in and around the first team at his former club, he’s done very well with us and trained with the first team on occasion.''
The 19-year-old Urhoghide trained with Nigeria's Olympic National Team in 2019 ahead of an U23 AFCON qualifier against Libya.
Igho Kingsley
Photo Credit : swfc.co.uk