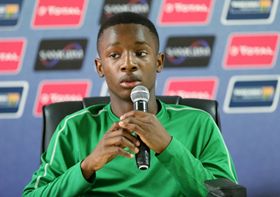 Allnigeriasoccer.com can exclusively report that Chelsea wing wizard Adrian Akande will not be representing Nigeria at the 2019 FIFA U17 World Cup.
The highly-rated teenager was officially invited to attend the Nigeria U17 training camp ahead of their trip to Brazil but has been forced to pull out of the squad because of club commitments.
Akande has not received the green light from his parent club Chelsea to travel to Abuja to link up with the Golden Eaglets.
The 15-year-old has been training with West Ham ahead of a possible departure from Stamford Bridge and has debuted in the Premier League 2 and U18 Premier League in the new season.
Arsenal attacking midfielder Malcolm Ebiowei, who has received an invitation from the Nigerian Federation, is also likely to withdraw from the Nigeria squad due to personal reasons, coupled with the fact that he is on the radar of the English Football Association.
Another foreign-based player invited to the Golden Eaglets squad, SV Eintracht Trier 05 goalkeeper Armin Olayo has not yet reported for duty but his failure to attend the camp has nothing to do with the German club not releasing him.
Meanwhile, Aston Villa central defender Iffy Udanoh has started training with the Golden Eaglets in Abuja.
Ifeanyi Emmanuel
Latest News