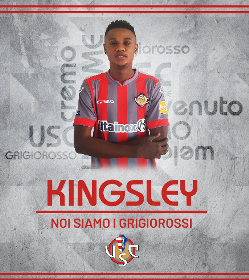 Through a statement on their official website, Italian Serie B club U.S. Cremonese have announced the signing of Nigeria U20 international Kingsley Michael.
The versatile midfielder has joined U.S. Cremonese on a season-long loan from Serie A side Bologna.
Kingsley was thought to be in the plans of manager Mihajlović as he played for the first team in pre-season and was handed his Serie A debut on the opening day of the season against Hellas Verona.
The 20-year-old fell down the pecking order following the signing of experienced Chile midfielder Gary Medel.
Last season, he made his debut in the Serie B in the colours of Perugia and finished the campaign with 25 appearances under his belt.
Michael won the World Cup with the Nigeria U17s in Chile four years ago and was part of the Flying Eagles squad to the U20 World Cup in Poland this year.
Igho Kingsley
Photo Credit : uscremonese.it